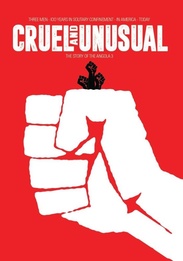 Cruel and Unusual is the story of three men who have spent longer in solitary confinement than any other prisoners in the US because of the murder of a prison guard in 1972 at Angola, the Louisiana state penitentiary. Robert King, Herman Wallace and Albert Woodfox were convicted by bribed and blind eyewitnesses and with no physical evidence. Targeted as members of the Black Panther Party, the film follows their struggle against the miscarriage of justice and their cruel and unusual treatment. Their story culminated in 2016 with the release of Albert Woodfox after 43 years in solitary confinement. This DVD features the official CRUEL AND UNUSUAL trailer, surround sound as well as English subtitles for the deaf and hearing-impaired.