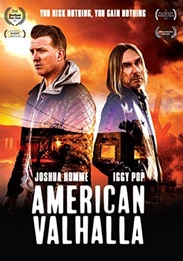 Growing up listening to Repo Man on his boom box, Joshua Homme idolized Iggy Pop. He was the reason why Joshua picked up a guitar in the first place so when he received a text out of the blue from Iggy asking if he d like to collaborate on some music, he froze. Filled with child-like fear, Joshua drafted several replies before settling on that would be wonderful. It marked the start of an unexpected musical affair between two mavericks of American rock: the frontman of Queens of the Stone Age and the Godfather of Punk.

American Valhalla candidly explores the relationship from text to tour via the recording of Iggy's final album, Post Pop Depression. Through lyric sheets, letters and journal entries, it brings you closer to Iggy, Joshua, and the creative process than ever before. After falling out with his band and releasing a run of poorly received albums, Iggy was determined to prove the doubters wrong. Joshua wanted to help his icon win at the end but how do you out-rock the Stooges?

American Valhalla takes you to Joshua Tree and inside the studio where Iggy, Joshua, Matt Helders (drummer, Arctic Monkeys) and Dean Fertita (guitar, Queens of the Stone Age) worked in total secrecy. With intimate access throughout the recording, the film witnesses Joshua s fizzing creativity and the band s fear and excitement of sharing a studio with Iggy.

With the music recorded and plans to tour gaining momentum, Iggy received the news that neither he nor the rest of the world was ready for. David Bowie, Iggy's closest music confidant and friend, had passed away. Would the tragic news bury the album in the Mojave Desert before anyone had heard a single note of it? In the film's most powerfully emotive scenes, American Valhalla shines a light on how Iggy, at his most vulnerable, reacted to David's death. From the depths of despair, Iggy drew inspiration. Grasping on to his own sense of impermanence and the legacy he himself would leave behind, Iggy - with the backing of his new band of brothers - rehearsed like a man possessed. The rehearsals would set in motion a sequence of concerts from The Teragram Ballroom in Los Angeles to a crowning performance at London's Royal Albert Hall where the connection between Iggy, Joshua, and the fans has never been so visceral.

The story of American Valhalla is told by only those who were there at the time. Conversations led by Anthony Bourdain (celebrity chef) complement stunning photography and cinematography at the studio, the rehearsals, and the concerts to reveal the growth of the intense bond between the musicians who have taken to heart the mantra: "you risk nothing you gain nothing."