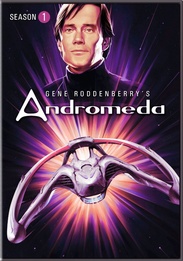 The long night has come. The Systems Commonwealth, the greatest civilization in history, has fallen. Now, one ship, one crew, have vowed to drive back the night and rekindle the light of civilization. In season one of GENE RODDENBERRY'S ANDROMEDA, Captain Dylan Hunt finds himself 300 years in the future after being rescued from a black hole by a salvage ship. He recruits the ship's eclectic crew to aid him in restoring the Commonwealth, but finds their motives often at odds with his own.