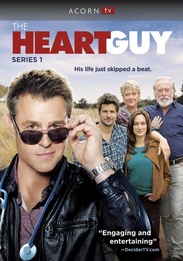 Gifted but arrogant heart surgeon Hugh Knight (Rodger Corser, Glitch, The Doctor Blake Mysteries) leads a charmed life in Sydney. He believes his talent lets him live outside the rules until an incident involving drugs and alcohol brings his world crashing down. Placed on probation and banned from performing surgery, Hugh retreats to his rarely visited hometown of Whyhope in rural Australia. Working as a GP at an underfunded hospital with a no-nonsense boss (Hayley McElhinney, The Babadook), Hugh struggles to reacclimate to rural life. And his complicated family situation makes his fall from grace even worse. Between his politically ambitious mother (Tina Bursill, Home and Away), emotionally distant father (Steve Bisley, The Great Gatsby, Mad Max), and his ex-girlfriend Charlie (Nicole da Silva, Wentworth, Rush) who is now married to his younger brother Hugh is constantly reminded why he left Whyhope. Can he start afresh, or will his bad-boy tendencies end his medical career for good?