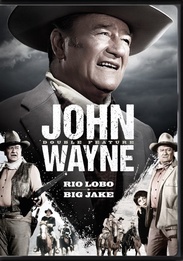 No name is more synonymous with westerns than John Wayne, and now you can bring home two of "The Duke's" most legendary performances with the John Wayne Double Feature. In Rio Lobo John Wayne headlines a star-studded cast (including Jorge Rivero, Jack Elam, and Victor French) as a Civil War colonel on the hunt for the men who betrayed his unit. In Big Jake, "The Duke" teams up with his real-life son Patrick Wayne and the incomparable Maureen O'Hara in a film about an aging gunfighter who must rescue his grandson from the ruthless outlaw John Fain (played by screen legend Richard Boone).