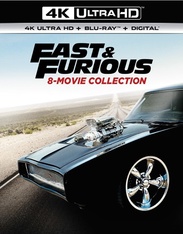 Buckle up for nonstop action and mind-blowing speed in the high-octane Fast & Furious 8-Movie Collection. Vin Diesel, Paul Walker, Dwayne Johnson, Michelle Rodriguez and an all-star cast put pedal to the metal in pursuit of justice and survival as they race from L.A. to Tokyo, Rio to London, and Cuba to New York City. Packed with full-throttle action and jaw-dropping stunts, these eight turbo-charged thrill rides place you behind the wheel of the most explosive film franchise in history!