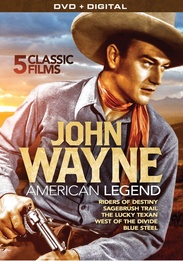 An undercover government agent comes to town to investigate a water supply problem with the local farmers. It turns out that an unscrupulous local businessman has a monopoly on the water and is forcing the farmers to pay high prices for it or forfeit their land. The agent comes up with a plan to get water for the farmers and bring the water baron to justice.

When John Brandt (John Wayne) is sent to jail for a murder he never committed, he escapes and eludes the law, heading west to freedom. He joins an outlaw gang and is befriended by Jones who turns out to be the real culprit in the killing. In spite of this, he had no idea that anyone had been convicted in his place. Brandt decides to forgive and forget, but everything changes when the pair falls for the same girl.

Ted Hayden (John Wayne) is searching for his parent's killer. He takes on the identity of a wanted outlaw in order to join a gang run by Gentry (Lloyd Whitlock), in the hopes that it will bring him closer to finding the guilty party. Hayden discovers that Gentry was responsible for the murders and is also trying to take the ranch of his girlfriend.

When a man appears to rob the payroll from a safe, Sheriff Jake (John Wayne) is hot on his trail. However, just when he is about to take him into custody, the man saves his life. The two join forces, and discover that Malgrove, a leading town elder, is attempting to confiscate the local ranches by having his gang blockade the supply wagons. The ranchers are ready to cave in, but Sheriff Jake and his partner intervene to save the day.