Cop And A Half: New Recruit 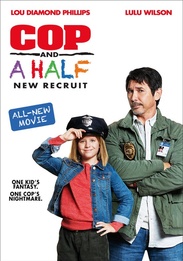 Grizzled veteran detective Mark Simmons (Lou Diamond Phillips) can't seem to catch the "Badge Bandit" â the city's serial prankster who's causing mischief and embarrassing the police. Karina Foley (Lulu Wilson) is a spunky 12-year-old who dreams of being a cop. She stumbles on Simmons' stakeout where she proves she's got serious detective skills and tech-savvy smarts. While Simmons wants to ignore Karina, the police captain does the unthinkable and teams them up. While on their mission to stop the "Badge Bandit," the unlikely duo goes on a hilarious, action-filled adventure!

Rated PG for some mild action and rude humor.