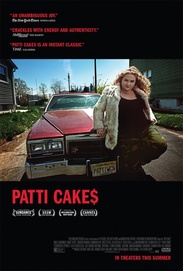 In a coming-of-age story straight out of Jersey, an unlikely rapper finds her voice as a one-of-a-kind hip-hop legend in the making in PATTI CAKE$, the first feature film from acclaimed commercial and music-video director Geremy Jasper. Set in gritty strip-mall suburbia, PATTI CAKE$ chronicles an underdog's quest for fame and glory with humor, raw energy and some unforgettable beats.

Rated R for language throughout, crude sexual references, some drug use and a brief nude image.