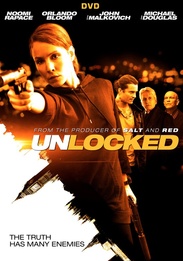 Noomi Rapace leads the all-star cast of this intense, London-set spy-thriller. She plays undercover CIA agent Alice Racine, charged with preventing an upcoming biological terror attack. But when violence erupts, Alice realizes her CIA colleagues (Michael Douglas, John Malkovich, and Toni Collette) may be trying to eliminate her to cover their tracks. On the run, she must rely on the help of a tough cat burglar (Orlando Bloom) to surviveâand to save the city from catastrophic devastation.