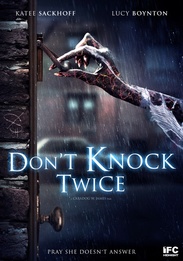 Knock once to wake her from her bed, twice to raise her from the deadâ¦â So goes a disturbing urban legend involving an abandoned house supposedly inhabited by a vengeful, child-stealing witch. When troubled teen Chloe (Lucy Boynton) raps at the door one night, she has no idea the horror sheâs about to unleash. Fleeing to the country home of her estranged mother (Katee Sackhoff)âa recovering addict whoâs turned her life around to become a famous artistâChloe must learn to trust the woman who gave her up years ago in order to stop the bloodthirsty, shape-shifting demon stalking them. This wild supernatural shocker delivers a barrage of nonstop jolts and searing nightmare images.