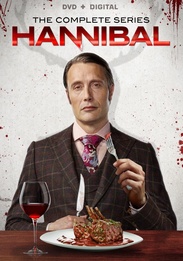 FBI Agent Will Graham (Hugh Dancy) hunts the most notorious serial killers. Graham is both gifted and cursed with an extraordinary ability: he can think like his prey, seeing what they see and feeling what they feel. While pursuing an especially troubling, cannibalistic murderer, Special Agent Jack Crawford (Laurence Fishburne) teams Graham with a highly respected psychiatrist â a man with a taste for the criminally minded: Dr. Hannibal Lecter (Mads Mikkelsen). Savor every last moment of Bryan Fullerâs beautifully acclaimed thriller with seasons one through three in HANNIBAL: The Complete Series.