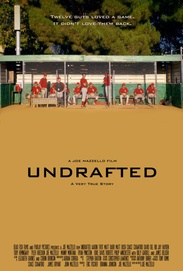 When twelve ragtag teammates set out to play what should be a meaningless summer intramural baseball game, it ends up becoming the most important game of their lives. This collection of characters â the reliever turned starting pitcher (Tyler Hoechlin), a hot dog power hitter (Chace Crawford), an outfielder with anger management issues (Joe Mazzello), a player coach with clipboard envy (Duke Davis Roberts), an over-eager catcher (Ryan Pinkston), the old guy who shouldnât be playing anymore (Philip Winchester), and the guy everyone forgot was on the team (Matt Bush) â truly gives new meaning to the phrase âamateur statusâ.

As they struggle to transition away from baseball and towards an uncertain future, the best player among them (Aaron Tveit) - who they all felt should have gotten drafted - has to deal with the news that his big league dreams were dashed, leaving him grappling with why he should still play. One game can be just another box score, but when it's played by a team galvanized around the love of the game, and for the pride they have in each other, it can define a lifetime.