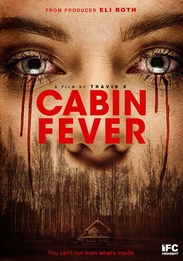 Executive producer Eli Roth presents this reboot of his instant classic gorefest, which features all new characters and all new kills. The story is familiar: fresh out of college, a group of five friends retreat to a remote cabin in the woods for one last week of partyingâonly to become snacks for a gruesome, flesh-eating virus. Whatâs surprising are the ingenious new deaths, which offer a fresh spin on a horror-comedy milestone.

Rated R for horror violence and gore, language, sexuality, nudity and some drug use.