Too Naughty to Say No 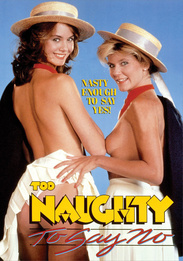 Beautiful and young Catholic schoolgirl Betty (Angel) is waiting to meet her friend for an innocent and fun filled weekend. After dozing off, she awakens to find that the world isn't quite as innocent and pure as she thought and soon finds herself trapped in a nightmarish world of sexual perversions. As she stumbles from one encounter to the next, her adventures introduce her to the debauched habits of everyone from the kindly Nun and Father at her school (Lisa De Leeuw and Michael Morrison), her unabashedly kinky friend (Ginger Lynn), and even a perverted undertaker (Harry Reems)!