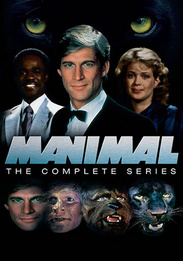 Dr. Jonathan Chase, wealthy, young and handsome. A man with the brightest of futures, a man with the darkest of pasts. From Africa's deepest recesses to the rarefied peaks of Tibet, heir to his father's legacy and the world's darkest mysteries. Jonathan Chase, master of the secrets that divide man from animal, animal from man. Partnered with a young policed detective and a former army corporal from the fields of Vietnam. A trio that stands against the crime that breeds in the concrete jungles and stretches its deadly tentacles to the fascinating but dangerious world beyond, the world of MANIMAL!

Jonathan Chase (Simon MacCorkindale), famed Professor of Criminology, with the inherited powers to transform himself into any animal he wishes, uses that power to assist the New York Police Department in solving major crimes. He is assisted by Brooke McKenzie (Melody Anderson), an intelligent and beautiful detective with the NYPD, and Tyrone "Ty" Earl (Michael D. Roberts), a former intelligence officer with whom he served in Vietnam.