Party Down: The Complete Series 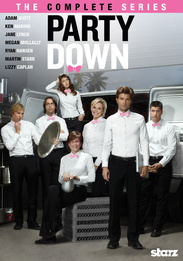 Adam Scott ("Parks & Recreation"), Jane Lynch ("Glee "), Megan Mullally ("Will & Grace"), Ken Marino ("Marry Me"), Martin Starr ("Silicon Valley"), Ryan Hansen ("Veronica Mars") and Lizzy Caplan ("Masters Of Sex") star as the employees of Hollywood catering company Party Down', a group of struggling actors and dysfunctional dreamers waiting for their big breaks while stuck serving hors d'oeurves. But in a town where everything is possible, can the ultimate going-nowhere job ever get them anywhere? Follow this ensemble cast in the Starz Originals hit.