Under the Dome: Season 3 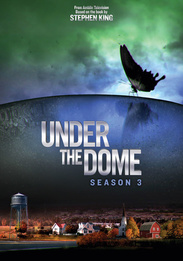 In Season 3 of Under the Dome, the line between friend and foe continues to blur. After a life-changing experience in the tunnels beneath the town, the people of Chesters Mill are trying to move on. But the arrival of a new resident and an opportunistic corporation prove thats not going to be easy. As the Domes purpose begins to unravel, it becomes clear that some wont make it out alive.