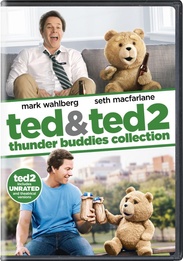 Ted Family Guy creator She MacFarlane delivers his signature boundary-pushing humor in the outrageous comedy-blockbuster critics are calling "hysterically funny!" (Peter Travers, Rolling Stone). John Bennett (Mark Wahlberg) is a grown man whose cherished teddy bear came to life as the result of a childhood wishand hasn't left his side since. Can John's relationship with longtime girlfriend Lori (Mila Kunis), move forward with his lovably profane buddy in the picture? Ted 2 Everyone's favorite foulmouthed teddy bear is back for a second round of hilarious antics and outrageous adventures. When Ted (voiced by Family Guy creator Seth MacFarlane) is declare property by the Commonwealth of Massachusetts, Ted and his best friend John (Mark Wahlberg, Transformers: Age of Extinction, The Other Guys) must go to court to fight for Ted's personhood. With the help of their smart, beautiful, (and pot-loving) lawyer (Amanda Seyfried, Mamma Mia!, Les Misérables), the thunder buddies for life battle to legalize Ted in this "wickedly funny" (Los Angeles Times) sequel that will keep fans laughing right up to the very end.