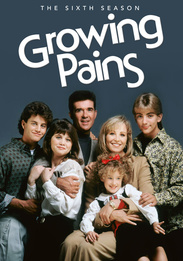 Moving out does not necessarily mean moving on, as Jason (Alan Thicke) and Maggie (Joanna Kerns) discover when Mike (Kirk Cameron) and Carol (Tracey Gold) move to the Big Apple together â to be roommates! As that arrangement goes about as swimmingly as the elder Seavers could have predicted, Ben (Jeremy Miller) struggles with life lessons about the true rewards of high school vanities, while Chrissy (Ashley Johnson) struggles just to get noticed by her busy family. Among the tricks and treats found in this 24-Episode collection is a special two-part anthology of Halloween frights as told by each member of the clan and an epic three-part trip to Europe that sees Maggie in deadly medical danger while Mike flirts with a fellow traveler. Meanwhile, back in the States, Carol learns something about life on the other side of the tracks, and Maggie must confront her fatherâs mortality.