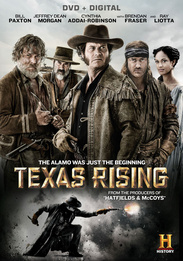 HISTORYÂ® brings to life the true story of how the people of Texas fought for freedom against the mighty Mexican military that had overtaken the Alamo. The legendary Texas Rangers assembled for the first time against General Santa Annaâs massive military might. United under the leadership of Sam Houston (Paxton) and with the help of his ragtag army, they passionately battled for life and country and the Lone Star State.