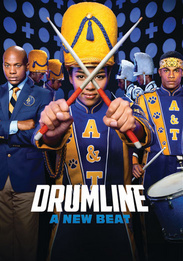 Drumline: A New Beat Step up for the high-energy sequel to the smash hit Drumline! In this upbeat film about dreams, dynamism and drumming, high school grad Dani Raymondâs (Alexandra Shipp) parents are anxious to send her to the prestigious college they've picked out for her. But Dani wants to follow her dreams and land a spot on the Atlanta A&T drumline. It wonât be easy, though: some of the upperclassmen donât want a girl on the line, and Dani finds herself in direct competition with her new love interest (Jordan Calloway). With incredible musical numbers, a gifted cast and a story thatâll quicken your heartbeat, Drumline: A New Beat is exhilarating entertainment from start to finish.