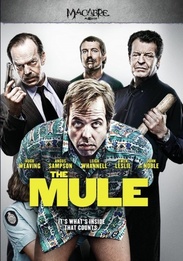 A naive man transporting lethal narcotics in his stomach is detained by the police. Alone and afraid, the âmuleâ makes a desperate choice -- to defy his bodily functions and withhold the evidence...literally. By doing so becomes a âhuman time-bomb,â dragging cops, criminals. lawyers and his mother into his impossible escapade. Inspired by true events, THE MULE is a comic nightmare of stomach-churning suspense and belly laughs.