The One I Wrote for You 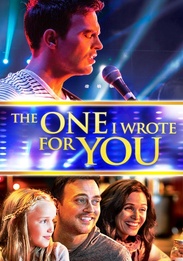 Ben had bigger dreams than serving chai lattes to hipsters. He had wanted to be a singer and a songwriter. But life doesnât always follow the script we try to write. Ben has a family and bills to pay. So when heâs offered a manager position at the coffee shop, his financial problems seemed to be solved. Then a new reality television showâthe Songâcomes to town. Without him knowing it, Benâs precocious 10-year-old daughter has entered Ben in the competition. Now Ben must decide if heâll pick up the microphone, along with a shattered relationship he left behind, to pursue the life he was meant to lead. âThe One I Wrote For Youâ is a family centric, feature-length film by David Kauffman. The film has broad audience appeal with messages about the challenges of choice that ring strong and true. The story encourages viewers to live authentically in pursuit of their unique passion and identity. The film also points out, however, that in following your dream, itâs important not to lose yourself.

Rated PG for some mild language and thematic elements.