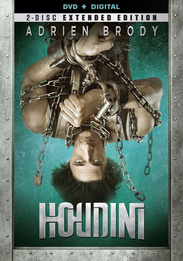 His ability to escape from handcuffs, straitjackets, and water tanks is legendary ? breaking the shackles of his past proved more challenging. Academy Award® winner Adrien Brody (THE PIANIST) and Kristen Connolly ("House of Cards") star in HISTORY®'s HOUDINI which follows the world-renowned master of escape's transformation from immigrant into the world's first superstar. Driven, disciplined, and actively chasing the American Dream, Houdini constantly pushed his physical limits to accomplish feats of strength that amazed audiences in an age of spectacle. And though they saw what he wanted them to see, his reality was more elusive than his escapes.