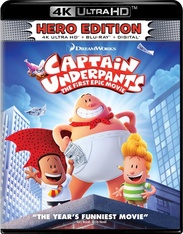 Tra-la-laa! DreamWorks Animation presents the year's most hysterically heroic comedy, Captain Underpants: The First Epic Movie! George and Harold are fourth-grade BFFs who love dreaming up funny pranks. One day, they accidentally hypnotize their principal into believing he's a dimwitted hero named Captain Underpants. But when the new schoolteacher turns out to be a disgraced scientist bent on ridding the world of laughter, George, Harold and Captain Underpants must band together to stop his evil agenda!