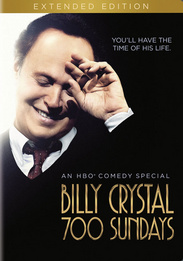 Billy Crystal 700 Sundays is an all-new HBO comedy special based on Billy Crystalâs award-winning, smash-hit, one-man Broadway show. Spanning several decades beginning in the 1950s, Crystal reminisces about what it was like growing up in a loving Jewish family in Long Beach, LI. He recalls the numerous eclectic relatives who inspired him; the huge influence of jazz on his family (his father ran an iconic record store in Manhattan, and his uncle was a Hall of Fame producer); his passion for the New York Yankees and, espec ially, Mickey Mantle; the impact of his fatherâs sudden and unexpected death on the teenaged Crystal and his mother; and finally, his emergence from grief to pursue his dream of becoming a comedian â a dream made possible by the support of his family and his wife.