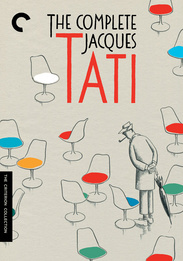 Though he made only a handful of films, director, writer, and actor Jacques Tati ranks among the most beloved of all cinematic geniuses. With a background in music hall and mime performance, Tati steadily built an ever-more-ambitious movie career that ultimately raised sight-gag comedy to the level of high art. In the surrogate character of the sweet and bumbling, eternally umbrella-toting and pipe-smoking Monsieur Hulot, Tati invented a charming symbol of humanity lost in a relentlessly modernizing modern age. This set gathers his six hilarious featuresâJour de feÌte, Monsieur Hulotâs Holiday, Mon oncle, PlayTime, Trafic, and Paradeâalong with seven delightful Tati-related short films.