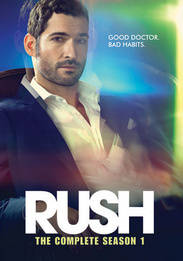 Not only does Dr. William Rush's (Tom Ellis) thriving L.A.-based medical practice include celebrities, moguls and gangsters, it's a completely private affair. As a highly skilled doctor who makes house calls to some of the most dangerous locations in the city, he can name his price -- and it's cash only. And while he struggles with the morality of his patients, he grapples with improving his own, in hopes of reuniting with a long-lost love, in one of the sexiest, most original and thrilling series to come to the small screen.