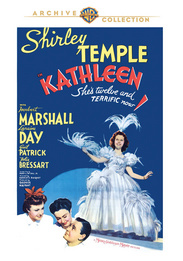 Twelve-year-old Kathleen wishes her widowed father would pay more attention to family life, such as finding her a stepmother. Her father complies, getting himself engaged to an imperious beauty. It's hate at first sight for Kathleen and her new mom-to-be, who believes children should be neither seen nor heard. Dad obviously needs some help in the wife-choosing department. So Kathleen gets busy match making, trying to spark a romance between her father and her pretty young governess. Shirley Temple delights as Kathleen in her first film after completing her contract at Twentieth Century-Fox, where she became cinema's greatest child star. Herbert Marshall and Laraine Day play Kathleen's father and governess. The fine supporting cast includes Felix Bressart (To Be or Not to Be) and Gail Patrick, who proved her comic talent for playing glacial women in the screw ball classics My Man Godfrey and My Favorite Wife..