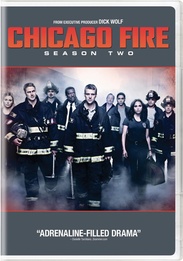 Chicago Fire returns with a riveting look into the everyday heroics and private lives of the firefighters, rescue squad and paramedics of Firehouse 51, where plunging into roaring infernos and putting out personal fires is just another day on the job. But in Season Two, there are more than just flames to battle when the station lands on the short list for a shutdown, sending the team on a rescue mission they're not equipped to handle. From Primetime Emmy® Award-winning executive producer Dick Wolf (Law & Order), experience all 22 Season Two episodes back-to-back and uninterrupted and feel the heat with the "smoldering cast"* of Chicago Fire. *Ileane Rudolph, TV Guide