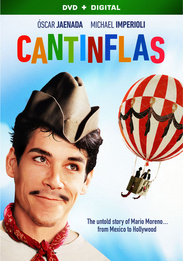 Cantinflas (Mario Moreno Reyes) is beloved throughout the Spanish-speaking world and is considered by many to be the Mexican Charlie Chaplin. This biopic traces his life as a young entertainer, who struggles to become a star in Mexico, while Broadway producer, Mike Todd, struggles to make Around the World in 80 Days in the U.S. A twist of fate brings the two together and they go on to win the Oscar for Best Picture.