Grant Hart: Every Everything - The Music, Life & Times of Grant Hart 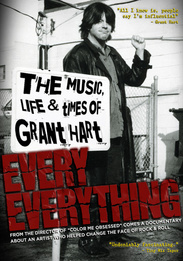 The only star and singing voice of this film, Grant Hart, the lucid yet damaged drummer of Husker Du, soberly analyses the great American punk tripartite of the 80s while rummaging around in its soul. Every Everything is a bold and original documentary where it all comes out, told by an articulate, alienated and ill-tempered chronicler, brimming with vulnerability, hatred, and terrible addiction.