Age of Uprising: The Legend of Michael Kohlaas 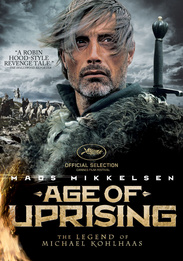 An epic drama set in 16th century France against a backdrop of feudalism in decline, AGE OF UPRISING: THE LEGEND MICHAEL KOHLHAAS stars Mads Mikkelsen (A ROYAL AFFAIR, VALHALLA RISING, Hannibal) as a well-to-do horse merchant who resorts to fanatical and violent extremes to obtain justice after a nobleman openly and illegally humiliates him by stealing two of his horses. Adapted from Heinrich von Kleist's novella, a classic of German Romanticism, MICHAEL KOHLHAAS was previously adapted for film in 1969 by Volker SchlÃ¶ndorff and served as the inspiration for E.L. Doctorow's Ragtime.