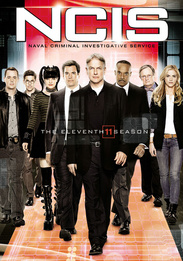 Season 11 of the hard-hitting drama NCIS takes action to greater heights. With 24 adrenaline-packed episodes, Special Agent Jethro Gibbs (Mark Harmon) continues to guide the elite unit from the Naval Criminal Investigative Service into dangerous waters in order to protect the nation from biological attacks, hospital bombings and an unpredictable terrorist group known as The Brotherhood of Doubt. This season, the NCIS team is tested like never before when one of their own is taken hostage by a terrorist at large and the mysterious re-emergence of the infamous Privileged Killer takes the team to New Orleans for a thrilling, two-part episode. Co-starring Michael Weatherly, Sean Murray, Pauley Perrette, Rocky Carroll, Brian Dietzen, David McCallum and Emily Wickersham as new team member Ellie Bishop  the NCIS crew is back and stronger than ever!