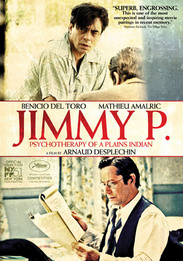 Arnaud Desplechin's extraordinarily intelligent and moving adaptation of Georges Devereux's landmark work of ethnographicpsychoanalysis stars Benecio Del Toro as the titular Jimmy P, a Blackfoot Indian and World War II veteran suffering from what initially seems like severe posttraumatic stress, and Mathieu Amalric as Devereux, a Hungarian Jew who reinvented himself many times over before coming to the US to study Mohave Indian culture. Both actors are at the top of their game and their interaction makes the best case for the "Talking Cure" ever depicted in a fiction film.