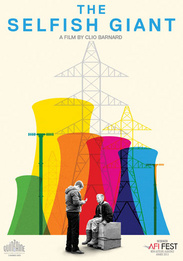 Clio Barnard's The Selfish Giant is a remarkably assured British feature that paints a portrait of two unlikely young friends. The film tells the story of two schoolmates in a struggling working-class community in Bradford, England: the scrappy, hyperactive Arbor (Conner Chapman) and the reserved, more mature Swifty (Shaun Thomas). To pick up some extra cash, Arbor and Swifty begin collecting scrap metal for Kitten (Sean Gilder), a shady local dealer with a penchant for racing horses. Arbor is eager to please, desiring the wealth that appears to come with Kitten's lifestyle. But it soon becomes evident that Swifty is the favored one, because of his talent with horses. As jealousy sets in, the fragile bond that holds Arbor to his closest mate begins to crumble away.