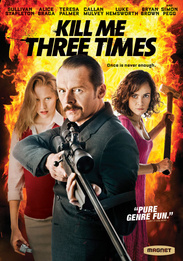 KILL ME THREE TIMES takes place in a sundrenched Australian surfing town, where a young singer, portrayed by Alice Braga, is the thread that binds three tales of murder, blackmail and revenge. Simon Pegg plays a mercurial assassin, who is hired by her wealthy husband (Callan Mulvey), but there is more than one person gunning for her. Sullivan Stapleton has been cast as a gambling addict that attempts to pay off his debts through a risky life insurance scam, whilst Teresa Palmer plays a small town Lady Macbeth who masterminds the scheme. Bryan Brown, a corrupt cop, also tries to get his cut and Luke Hemsworth portrays Braga's love interest, a local surfer who hopes to rescue the young woman from Pegg's telescopic sights.

Rated R for bloody violence, language and some sexuality/nudity.