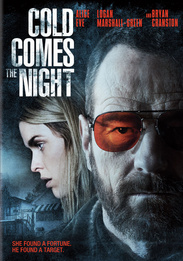 Chloe and daughter Sophia live in a rundown motel on a lonely highway pit stop. As the proprietor of the motel, Chloe is in financial trouble and has quietly allowed a prostitution operation to run on the premises under the supervision of Billy, a corrupt cop whose affection for Chloe is unrequited. One night, Topo (BRYAN CRANSTON), a nearly blind career criminal, and his driver stop over at the motel while en route to deliver cash to an unknown boss. An accident causes Topo to lose his driver, and their car is taken to the police impound with the money still inside. Robbed of his money and his surrogate set of eyes, Topo takes Chloe and Sophia hostage, and forces Chloe to be his new driver and guide, using Sophia as collateral. They set out after Billy, who has stolen the money from the impounded car. Attempting to save her daughter and capitalize on the situation, Chloe strikes a deal with Topo to split the cash, hoping to use her share of the money to escape to a better life. But soon she gets in over her head, and a series of double-crosses leaves a cloud of mayhem in this story about desperation and survival.