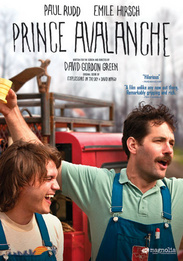 Driven by striking performances from Rudd and Hirsch, PRINCE AVALANCHE is an offbeat comedy about two men painting traffic lines on a desolate country highway that's been ravaged by wildfire. Against this dramatic setting, beautifully shot by frequent Green collaborator Tim Orr, the men bicker and joke with each other, eventually developing an unlikely friendship. Funny, meditative and at times surreal, PRINCE AVALANCHE features a moving score by Explosions in the Sky and David Wingo, and was loosely adapted from an Icelandic film called Either Way.