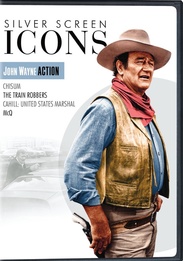 THE TRAIN ROBBERS (1973) - Three Civil War veterans (Wayne, Rod Taylor and Ben Johnson) team up with a train robberâs widow (Ann-Margret) to recover a half-million in gold. But the dead manâs ex-partners want the gold, and theyâll kill to get it in this rollicking caper from writer/director Burt Kennedy.

CAHILL: UNITED STATES MARSHAL (1973) - Lawman J.D. Cahill (Wayne) can stand alone against an army of bad guys. But as a widower father, heâs on insecure footing raising two sons. Particularly when he suspects theyâre involved in a bank robbery and two killings in this suspenseful blend of action and heroic sentiment.

McQ (1974) - As Detective Lon McQ, Wayne thunderously enforces the law in a high-velocity thriller thatâs like a big-city revenge Western on wheels. Directed by action master John Sturges and written by coproducer Lawrence Roman, McQ is a breathless, gritty showcase for the Duke.