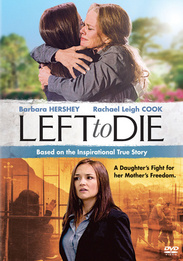 Accused of a crime she did not commit. Imprisoned by a corrupt system. The odds are stacked against Sandra Chase (Barbara Hershey, Black Swan) when she finds herself behind bars in Ecuador. As her daughter (Rachael Leigh Cook, Nancy Drew) tirelessly works to rally political support in Washington D.C., Sandra makes desperate choices in order to survive her horrifying ordeal. Co-starring Vincent Irizarry (TV's "All My Children") and Nicholas Gonzalez (TV's "Grimm"), Left to Die is the inspirational true story of faith, family and the triumph of the human spirit.