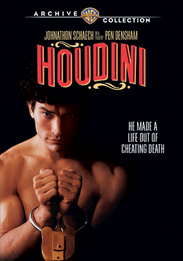 High above the city street, Harry Houdini hangs by his ankles. A madman's straightjacket binds his torso and arms. He'll never get out of this one alive. But somehow he does. The only bonds Harry Houdini (Johnathan Schaech of That Thing You Do! and Hush) never wished to escape were his marriage bonds to his cherished wife and assistant Bess (Stacy Edward of In the Company of Men and Primary Colors) - a character trait that's a strong story element of this marvelous film about the legendary illusionist, written and directed by Pen Densham (Moll Flanders, Robin Hood Prince of Thieves). From his early career struggles to his crusade against spiritual charlatans, from the Water Torture Cell to other signature feats, from the fate he could not escape to seance attempts at summoning him from beyond, the magic and mystery live on in Houdini.