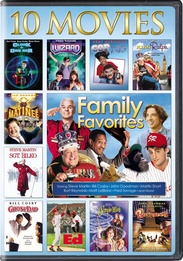 Cloak & Dagger: Fantasy video gamer Davey (Henry Thomas) suddenly finds his imaginary Cloak & Dagger world has come to exciting and perilous life and he must team up with his games hero to defeat enemy spies. The Wizard: Two runaway brothers (Fred Savage & Luke Edwards) join forces with a resourceful girl (Jenny Lewis) on an adventure of a lifetime when they head to California for a video game competition. Cop and a Half: Devons dreams of becoming a cop when he grows up suddenly come to life after he witnesses a horrific crime and is paired with a reluctant police veteran (Burt Reynolds). King Ralph: After the royal family is accidentally wiped out, a rude and crude Las Vegas lounge singer (John Goodman) is discovered to be a distant relative and the next king of England! Matinee: Movie promoter Lawrence Woolsey (John Goodman) brings his unique brand of flashy showmanship to the unsuspecting residents of Key West in this hilarious tribute to a more innocent (and outrageous) time in American cinema. Sgt. Bilko: Leading the sorriest group of soldiers ever to enlist in the armed forces, the outrageous Sgt. Bilko (Steve Martin) must prevent his base from being shut down and clear his name. Ghost Dad: In this spirited family comedy, a workaholic father (Bill Cosby) crosses over to a different world and must learn how to be seen and heard as a ghost in order to care for his three kids. Ed: Minor league pitcher Deuce Cooper (Matt LeBlanc) gets a major league boost in good fortune when the teams new star player  an amazingly talented chimpanzee  becomes his roommate and buddy. A Simple Wish: When Anabel (Mara Wilson) wishes for a fairy godmother, her wish takes the form of magical misfit Murray (Martin Short) who helps to rescue her dad and thwart a wicked witch (Kathleen Turner). The Borrowers: A family of four-inch people living beneath the floorboards must save their home from being destroyed by an evil real estate developer (John Goodman).