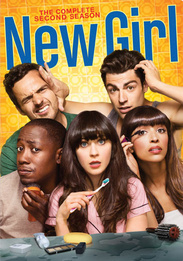 The romantic tension between Jess (EmmyÂ® Nominee Zooey Deschanel) and Nick (Jake Johnson) escalates in the hilarious, quirky second season of New Girl â but will they ever hook up? Meanwhile, Schmidt fails to be hip, Winston isnât âpreparedâ for a hot date, and Nick faces a death in his dysfunctional family. While Jess does her best to replace Cece on a modeling job and a drunk Elvis impersonator at a funeral, Schmidt and Winston hope to rearrange Ceceâs arranged marriage. Relive all 25 outrageous episodes featuring guest stars like Jamie Lee Curtis, Rob Reiner and Dennis Farina, and enjoy fun bonus material â including the extended version of the hugely popular Virgins episode â only available on the DVD.