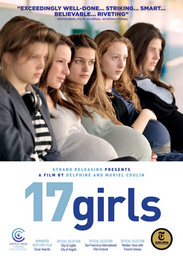 Inspired by a true story that took place in Massachusetts, Delphine and Muriel Coulin's provocative debut focuses on a group of bored teenage girls who all make an irrevocable pact. When classmate Camille (Louise Grinberg, The Class) accidentally becomes pregnant, she encourages her friends and fellow classmates to follow suit. It's only a matter of time, before 17 girls in the high school are pregnant and the town is thrown into a world of chaos. Set in the writer/directors' small, seaside hometown of Lorient, 17 GIRLS is a reflection on adolescence, body image, friendship and the perplexing realities of growing up.