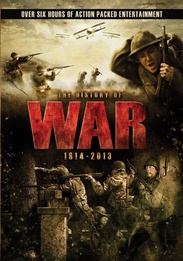 In this stunning four disc collection of war movies the viewer gets to take a journey from the trenches of WWI to the horrors of modern day warfare. Starting with William Marchâs acclaimed book Company K, then follow two British heroes during their exploits behind enemy lines in Two Men Went to War, stand side by side with the most decorated battalion in U.S. history during the exploits of the 442 in Only the Brave and finish off your journey in Purple Heart as you see a sniper in action! A must have for any war and history buffs.