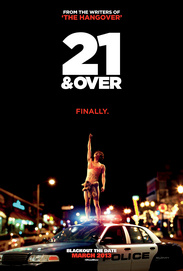 From the writers of The Hangover, comes a comedy 21 years in the making. Straight-A college student Jeff Chang has always done what he was supposed to do. But when his two best friends take him out for his 21st birthday on the night before an important medical school interview, Jeff Chang snaps and decides to do everything he wants to do. What was supposed to be a quick beer becomes a night of humiliation, over indulgence and utter debauchery in this outrageous comedy about a rite of passage gone so very wrong.