The New Adventures of Old Christine: The Complete Fifth Season 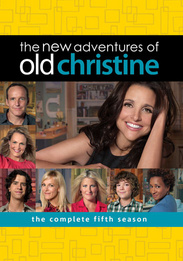 Divorced working mother Christine Campbell (Emmy winner Julia Louis-Dreyfus - Seinfeld) attempts to juggle the daily stresses of motherhood and business -- which doesn't mean she isn't prone to taking NyQuil to get to sleep or leaving voicemail messages to herself in the middle of the night. In the fifth season of this hilarious comedy, Christine and Barb (Emmy winner Wanda Sykes) go to the Bahamas to sort out Barb's immigration woes, but find that Barb's only solution might just be to marry Richard (Clark Gregg)? Richard, meanwhile, is trying to woo New Christine (Emily Rutherfurd) after being left at the altar. And, as Ritchie (Trevor Gagnon) enters middle school, Christine finds the "Meanie Moms" are as present as ever. Notable guest stars include Eric McCormack (Will and Grace) as a therapist at Matthew's practice and Dave Foley (NewsRadio, Kids in the Hall). The series is executive produced by Kari Lizer (Will and Grace) and Andy Ackerman (Seinfeld).