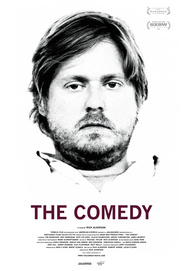 On the cusp of inheriting his father's estate, Swanson (Tim Heidecker, "Tim & Eric Awesome Show, Great Job!") is a man with unlimited options. An aging hipster in Brooklyn, he spends his days in aimless recreation with like-minded friends (âTim & Ericâ co-star Eric Wareheim, LCD Soundsystem frontman James Murphy and comedian Gregg Turkington a.k.a.âNeil Hamburgerâ) in games of comic irreverence and mock sincerity. As Swanson grows restless of the safety a sheltered life offers him, he tests the limits of acceptable behavior, pushing the envelope in every way he can. Heideckerâs deadpan delivery cleverly masks a deep desire for connection and sense in the modern world. The Comedy wears its name on its sleeve, but director Rick Alverson's powerful and provocative character study touches a darkness behind the humor that resonates with viewers long after the story ends.